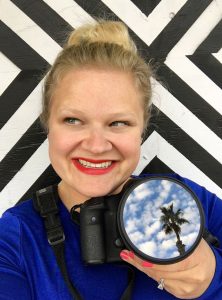 Ronda Churchill is a freelance photographer based in Las Vegas for the past 16 years,
specializing in photojournalism. She graduated Cum Laude with a Bachelor of Fine Arts from
Southern Illinois University. She has a background in studio photography and graphic design.
Recently, Churchill completed a body of work called 96 Hours, which encompassed a collection
of 21 street photography images shot in 96 hours on the island of Cuba. She traveled solo, took
three flights, and arrived with few items including: two camera bodies, three lenses and an
iPhone. To immerse herself in the rich Cuban culture, she stayed in two casa particulares
(homesteads) and communicated in Spanish with the families. 96 Hours received a Nevada Arts
Council grant and was displayed in Clark County in January of the following year.
Churchill appeared in “LIFE: Year in Pictures 2002” for coverage of the one-year anniversary of
9/11 in New York City, upon attending the prestigious Eddie Adams Workshop. She has received
awards from: Nevada Press Association, National Press Photographers Association and Editor &
Publisher Photos of the Year.
Churchill’s editorial and commercial clients include: ABC/Disney, Agence France-Presse,
Associated Press, Bloomberg News, Boston Globe, Chicago Tribune, European Press
Association, Los Angeles Times, Las Vegas Review-Journal, NBC/Universal, New York Times,
San Francisco Chronicle, Samsung, Sony, Sports Illustrated, USA Today, US Bank, Washington
Post and ZUMA Press, among many others.
In her free time, Churchill enjoys working on a number of photography projects centered upon the
southwest paired with hiking in remote areas. Churchill also enjoys traveling the globe, carrying
film and digital cameras, a warm smile and an open heart. You can find her on Instagram:
@rondachurchill
To contact her to document your next corporate event or business headshots, you can reach her
at www.rondachurchill.com