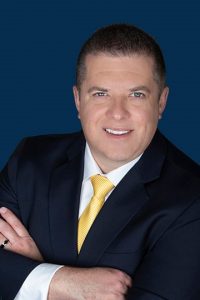 Darren J. Lach focuses on helping people who have been injured.  Darren’s passion is to achieve the highest possible result for each one of his clients in and out of the court room.  He represents people who have been injured because of a car accident, trucking accident, slip and fall, work injury, negligent security, negligent training, boating accident, injuries to a minor, and all other incidents involving injuries.

Darren’s commitment to excellence started with an ECHL Championship in 1998-99, as a member of the University at Buffalo men’s ice hockey team and graduation from the University at Buffalo in 2002.  His compassion, attention to detail and leadership resulted in Darren being elected as the President of the Student Bar Association at the Thomas Jefferson School of Law where he served as the voice of the students involving all matters on campus.  In 2005, he earned his Juris Doctor from Thomas Jefferson School of Law.  In 2006, Darren moved to Las Vegas and worked as a defense attorney for five and a half years prior to joining a personal injury law firm in Las Vegas to help people get the compensation they deserved.

No matter the difficulty or complexity involved in a case, Darren will fight for you until the end.  This has resulted in Darren obtaining millions of dollars in recovery to his clients from settlements and jury verdicts.  As a successful trial attorney, Darren will be there for you from the beginning of your claim through a jury trial.  Darren is routinely hired by other local injury attorneys to pursue cases through litigation and trial.

Darren received the award for the highest level of professional excellence for legal knowledge, communication skills and ethical standards from his peers with an AV Preeminent rating by Martindale-Hubbell.  Only approximately 10% of attorneys have achieved this prestigious honor.  Darren has also been recognized on multiple occasions as being a member of the Legal Elite in Las Vegas by the Nevada Business Journal.

When not in the office, Darren enjoys playing ice hockey for the LV Police Hockey Team, scuba diving, golf, and supporting the Vegas Golden Knights.